As you may have guessed from our last post, we've been hard at work polishing Missing Stars: Act One for Steam. But what does that entail?

Well, for starters, we have a few extra sprites we'd like to add:

Renee and Eva got a few lines in some scenes, but didn't actually get any sprites associated with them, which caused some confusion. Because of time constraints we couldn't include everyone initially, so for the Steam version, we decided to give everyone a face.

Internally, we keep track of side characters so that we can re-use them in other scenes, as opposed to making another one-off character that's never seen again. Eva will definitely get some more screentime, so get ready to see more of her!

We have also taken the time to upgrade some of our preexisting sprites to add better shading and more accurate lineart. Likhos and the rest of the art team are working hard, and it shows! 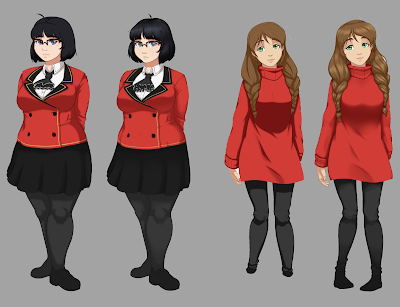 Sprites are one thing, but CGs are another thing entirely. CGs are the most time-consuming part for our artists, mainly due to the level of detail that's required. However, all that extra effort results in stunning visuals that many a visual novel reader greatly appreciates.

Parallax effects are something that we wanted to include as a means of immersing the reader into the story with a 3D "room" with characters. It's subtle, but we think it's very cool. Here's an example!


Some of our CGs will have some additional depth added to them thanks to parallax. Adam, our lead writer and sometimes-programmer, figured out this neat effect (and is quite proud of how it all looks). Ren'Py 7.4.5 will feature some more advanced 3D staging features, making it easier than ever to include more of these types of CGs in later parts of Missing Stars.

That's all for this month, but stay tuned for more updates as we move closer and closer to our Steam release!